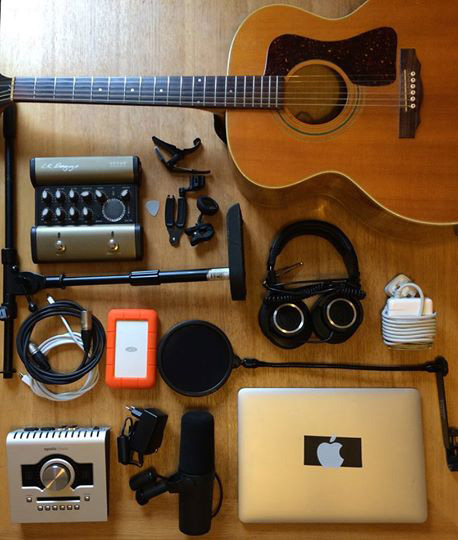 very happy to report that all the music on the new nada surf record is done! we’re really excited about it. it’s definitely our most varied album so far. most of the vocals are done too, but i still have a couple of songs to sing and there are some words missing here and there. as soon as that’s done, we’re ready to mix. no release date yet, but we’re in the home stretch and we’ll get it to you as soon as possible! right now i’m driving around holland, france and belgium in a rented hybrid, playing solo acoustic shows (and thinking about those words). i’ll have two or three days off and i’m going to finish up the singing in hotel rooms. during the day of course, when i hope no one’s asleep.

while i was packing i took a picture of everything i need to record and play live. i realized afterwards that i’d forgotten a guitar cable and extra strings, so i brought those too. these are the dates that are left on the tour. i may add one or two shows in france (one in paris at least), i’ll keep you posted. come say hello!